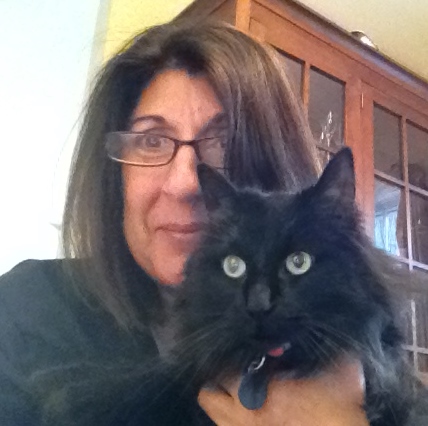 Message to Spike: Spike, you had the sweetest disposition of any cat we've known. You always wanted to hang out and meet new people. We'll miss your beautiful eyes, your way of sneaking up behind us when we're watching tv and putting your paw on our shoulder for pets, the excited way you would trot down the stairs to get your breakfast. Craig will deeply miss your help every day while he was in his office working for the past two and a half years. You brought great joy to our lives and we loved you dearly.

Tell us about Spike: Spike has an interesting story. In 2009, my 18 year old niece went to an animal shelter with her girlfriend and decided she wanted to get a cat. She saw Spike, who may have been in the shelter for many months, allegedly because she was a long-haired black cat, and people don't like black cats. Her fur was not well tended to and it stood up in spikes, so that's how she got her name. The problem was that my niece's mom hates cats, and told her to take Spike back to the shelter, which my niece refused to do. Spike went couch-surfing for awhile, staying with my niece's grandmother, and then my niece's brother and his roommates, who changed her name to "Mary Jane." They got evicted from their apartment, so Spike went to stay in my niece's car. I (Linda), was grieving the loss of our prior cat, and told my niece we would take Spike if no one else would. Only thing was, I "forgot" to ask my husband! Well, no one else wanted Spike, so when my niece called to tell me this, I told her we would take Spike. Shortly thereafter, my niece drove 300 miles from Michigan to bring Spike to us. For the last 13 years, my husband has told anyone who would listen how I conned him into getting Spike. Guess who became Spike's best friend at the end? Yup! It's hard to remember what Spike was like when she was a youngster. She never liked toys much. She liked to try to sit at the table when we would eat dinner, and she would walk on the piano keys or sit on the bench when I would play. Mostly she just liked being around humans. She would trot to the door whenever we had company to find out who was there. She liked to plop down in between us when we watched tv. She talked and hummed a lot. Back in the day, she tried to sneak out a few times. I would find her exploring outside around the perimeter of our house. After a while, she must have figured out it was nicer inside because she got over that phase. Spike was a love. Sweet, gentle and smart. We miss her so much.
Font Resize
Contrast
Accessibility by WAH
Call Us Text Us