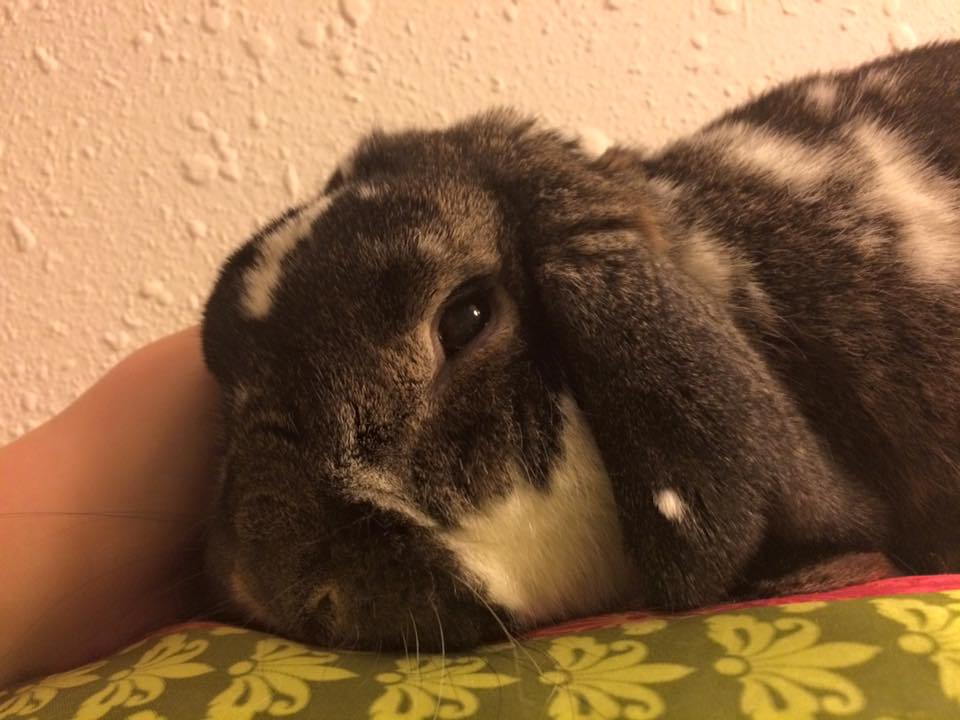 Message to Sinnamon: Sinnamon was the kind of bunny that changed a lot of peoples' minds about bunnies. He was smart, sassy, and snuggly--the perfect pet trifecta. People were often surprised at how attentive he was to humans because they expected him to be shy. But Sinnabun was the least-shy bunny on Earth which made him the perfect other half to his bunny brother Clove who is a shy fellow. When I graduated from college, my first apartment was a studio. And the bunnies' house, made by their grandpa, was at the foot of my bed. It took me a while to get used to Sinnabun thumping at all hours of the night to be paid attention to. He knew I was right there and, because the house was dual-level, those thumps were LOUD. He scared the daylights out of people when they slept over which was pretty hilarious.

Tell us about Sinnamon:
When my husband and I moved to Chicago, and well before then too, he made it clear he really wanted a Pug dog. Even though we had the buns, I promised him that if we saw a Pug breed dog up for adoption that already had a silly name like Puggington or Puggsley, we'd adopt them. Low and behold a Puggle named Pugglsey went up for adoption the day I said that and we were smitten. But the shelter wasn't so sure it was a good idea to adopt a Beagle mix to a home with small animals. We insisted that the buns would be just fine and arranged a meet-and-greet for Puggsley to see how he'd respond.

I held Sinnabun in my lap first, as he was the calmer bun, for Puggs to say hi to. When Puggsley came over, he gently walked up, licked Sinnabun's face, and laid down with his head on his paws in front of him. That was the beginning of Puggs' devotion to my loppy bun. Don't get me wrong, Puggs loves Clove too, but Sinnabun was his buddy. Every morning for just shy of the four years they shared together, Puggsley's first duty of the day was to race out to the living room to check on his bunnies (to check on Sinnabun.) "Hi Minmin" was Puggsley's first trigger phrase at our home because he knew it meant Sinnabun was out for playtime and he could give him a million sniffs. Even after years of realizing Sinnabun didn't want to play with Puggsley's toys, he still piled the toys up in front of Sinnabun's pen--just in case.

Their friendship is one of my favorite stories to tell because they defied so many expectations.

Sinnabun was, in every way, a one-of-a-kind bun.
Font Resize
Contrast
Accessibility by WAH
Call Us Text Us