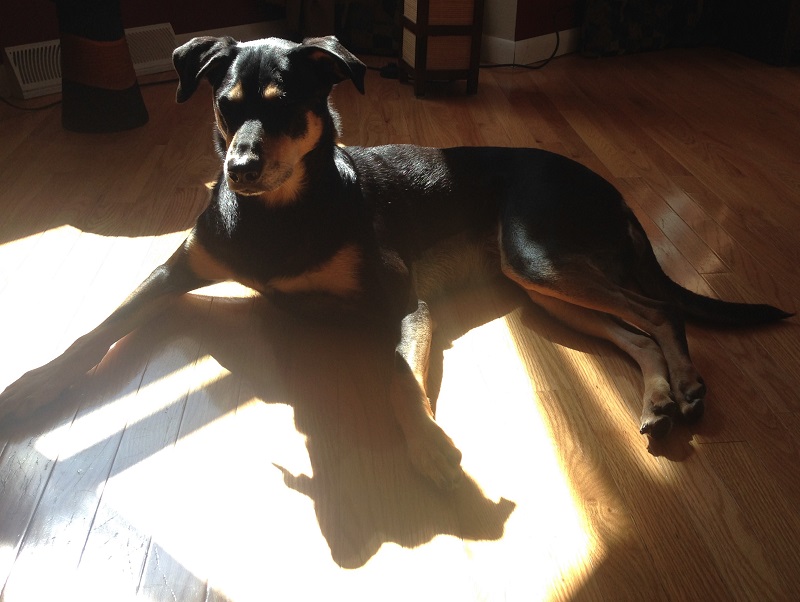 Message to Moxi: In loving memory of Moxi, our lab/dobe mix. Our family adopted her as an 8-week-old puppy. A local shelter rescued her pregnant mama, who was in a grave situation in Tennessee. When our family went to see the pups, their hearts were divided between a chunky male and tiny female. As soon as mom heard the female was born not breathing, and survived with the help of the foster father, and observed her among the other pups, she knew she was meant to become part of our family. We loved experiencing everything “puppy” and dad quickly saw she had a lot of “Moxie”. Likely due in part to her initial traumatic entry into our world. Although Shadow (her new sister that crossed over 3 months ago), took time to win mom over, Moxi knew she had not only won mom over, but dad, Luke, and Jessi immediately. Shadow, just over 1 year old at the time, stepped into the role of alpha and surrendered her puppy self for she knew Moxi needed to learn many things.

Tell us about Moxi: Moxi was not as interested in some lessons Shadow bestowed, like barking and announcing everyone’s arrival for she felt it was disruptive to the family. She did however, bark on occasion when she took some time to adjust to whomever entered our home. And although she appeared to always be a “puppy”, she took on the vital role of therapist for our family. Mild mannered, she made herself readily available to each one that needed her TLC and had a very special connection with Jessi, her girl. Although she herself was easily startled if something or someone scared her and unsure of all the dogs at the dog park, she was never uneasy when offering her love and support to those of us that were uneasy at different times in our lives. She was steady and certain and made herself easily accessible for support and relief. She loved swimming (to get tennis balls), walks, outdoor family trips, stuffies, waiting for Mom and Jessi by the front door (but happily greeting everyone), soulful connections with her Jessi, fun random moments with Luke, homemade meals from mom, chewing on sticks, and tug of war. She crossed over remaining the champion at tug of war…no one, literally no one, could beat her. She also loved treats and whatever “fell on the floor” when mom was preparing food, or dad giving her pizza corners, or Jessi tossing her a late-night ice cube. And unlike most of us, she could honestly show that she NEVER had a bad photo taken of her, in her entire life! Unless of course it was intentional, one of her and Jessi’s wacky moments when they’d take silly photos to make the family laugh. Every evening she demanded we pause and have a meaningful interactive conversation for it was her time to be heard. She would express all she needed to about the day’s events, her frustrations, tattling on her fur siblings on what happened while we were away, her excitement, and in the end, her grief, discomfort, and pain. We willingly engaged in these conversations, and she loved how it would make mom and Jessi laugh (except when she wanted to be taken seriously of course). She often would rub her face along the couch to scratch those itches the family just could not seem to get to. And Moxi was very excited when Batman (our foster failure chihuahua/schipperke mix) arrived for he was all about playing and the two of them would do so to exhaustion or until Shadow said they were taking it too far. Moxi loved Miss Mona and Winnie, she would however on occasion spook them, so they’d react and run much to her delight. They didn’t seem to mind for it added some excitement to their day filled with catnaps and it was all part of co-existing. Moxi became noticeably depressed after Shadow crossed over August 5, 2022. She and Shadow kissed one another just before Shadow departed and Moxi stayed near her until she departed our home. Shortly after, Moxi was diagnosed with a rare vaginal cancer after blood was present. Due to her age, we elected palliative care and embraced each day we had remaining with her for the prognosis of this form of cancer was poor, with or without surgery. Our family arrived at the difficult decision to assist her with crossing the rainbow bridge on November 5, 2022 to reunite with Shadow as soon as she could, 3 months to the day. She was not only depressed, but her puppy spirit also left with Shadow, she was not comfortable, and was in pain and restless due to the cancer these past couple of weeks. We allowed her to leave us “a day sooner, rather than a day too late”, for witnessing any of our furry family in pain is not an option. We now honor who she forever remains in our hearts, with dignity and let her go as soon as she requested and gave us her signs and approval. She remains our “forever puppy” and gifted our family with so many cherished memories. As hard as it is, we do understand that 13 ½ years is a blessing for large breeds (even though there is never enough time), and we loved one another immensely and she showed us how to live…a truly well lived life of love filled with silliness, presence, loyalty, and compassion. ~Forever in our hearts, Mom, Dad, Luke, Jessi, Winnie, Batman, and Miss Mona
Font Resize
Contrast
Accessibility by WAH
Call Us Text Us