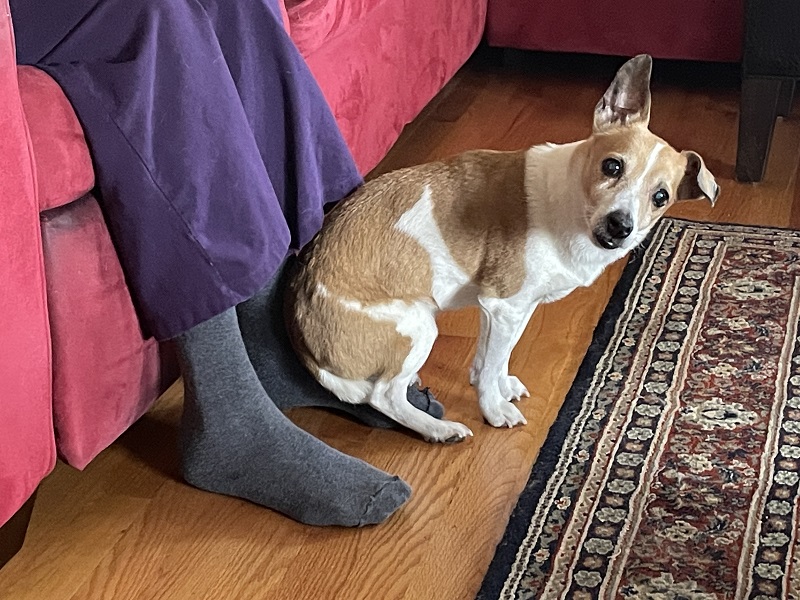 Message to Dino: Dino, our beloved Jack Russell terrier, passed over the rainbow bridge after a long and eventful life this past Sunday. The humans and cats in his family can't believe he's gone. Rest in Peace.

Tell us about Dino: Dino and his pal Enzo lived with a woman and her son, but a bad conflict arose with the woman's boyfriend, and she thought the only way to deal with it was to put them down. The vet refused and took them to a local rescue shelter. The shelter treated them well, with regular meals and contact with friendly people, but the shock of losing their home was hard. We adopted them in late 2013, after they had been at the shelter many months. Our cats were used to having dogs around and accepted them with no problem. Dino and Enzo, both energetic Jack Russells, enjoyed daily walks, hours of playing chase-the-ball, trips to the dog park and hanging out--the two always together. Though Jack Russells are blessed with relatively long lifespans, the years eventually caught up with them. Enzo passed last year, a sad event that was hard on Dino. But he learned that though he'd lost his longtime friend, he still had many others who cared for him. Even at an advanced age of at least 19, he was happy to go on walks, hang out with his family, take car rides, and sneak bits of roast beef into his meals. The house is so quiet now, and we miss him terribly.
Font Resize
Contrast
Accessibility by WAH
Call Us Text Us