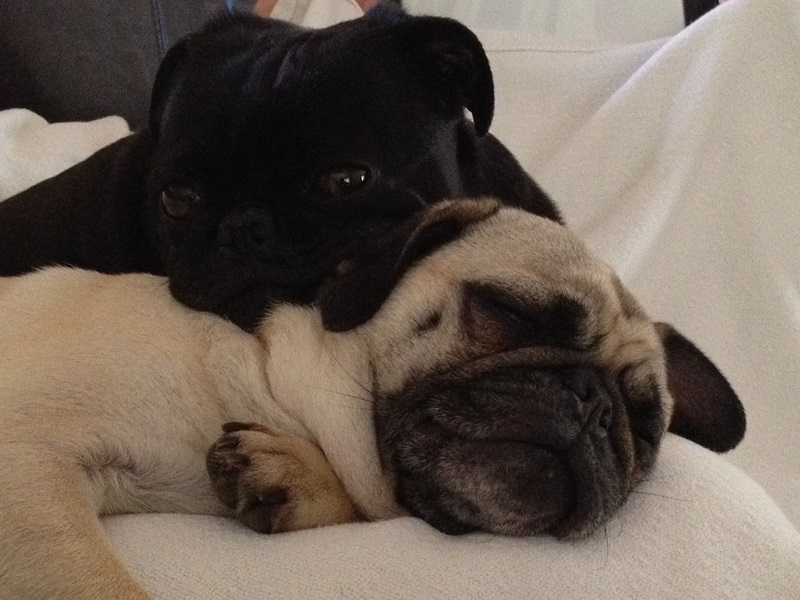 Message to Cooper: Our Dearest Cooper - thank you for all the years of love and joy you brought to the family. Every day your big, beautiful brown eyes and big heart could erase even the toughest day. We were blessed to have you in our lives for almost 15 wonderful years, bringing lots of laughs and joy as you had a real appreciation for all the world's simple pleasures...walks outside, running through leaves, napping in the sun, boiled chicken. We will miss you more than words can express but we are comforted knowing that you are back with big sister Lola, doing all your favorite things again. You will live forever in our hearts always.

Tell us about Cooper: Cooper’s Story – Sweetest Boy Ever We had been looking for a buddy for our 1yr pug, Lola. She had a lot of energy and even with doggy day care a few days a week, it seemed like she would be best with a buddy at home. We were not looking that hard but just keeping an eye out and hoping the right dog might come along. One day, there he was, the picture of the sweetest boy ever. Cooper, our beautiful black pug, was at a shelter in Miller Beach, in northwest Indiana. In the picture, one of the staff was holding him and put a Cubs baseball cap on him. He was so adorable. We couldn’t believe he was at the shelter. We called and found out he was 1 ½ yrs. old and the family had turned him in along with two other pets as they lost their house. This was during the 2008/09 housing crisis and many pets were being brought in by families losing homes. We went to see him that afternoon and brought Lola so that they could be introduced. She loved Cooper right away, we brought him home that day. Cooper & Lola were instant buds, two peas in a pod. Even though Cooper was a few months older, he was smaller than Lola and we could tell the struggle his former family went through impacted Cooper. He was underweight and wasn’t quite used to having all the toys that Lola was used to. When they would play “Chase-Me” with a toy, Lola would run and dodge with the toy, enjoying having Cooper chase her around the house. However, once Cooper got a toy, he’d run straight under the sofa with it as if concerned this was his one and only toy and he was not going to give it up. Lola couldn’t reach him there, but she’d crouch down and play bark at him to come out from under the sofa as if to say “hey, the game is Chase-Me, silly”. Eventually Cooper realized that in his new home, the toys and love would never go away. They remained inseparable and so any visit to the groomers or day care came with instructions that you have to keep them together. Lola was the big sister to Cooper and always wanted to make sure he was safe & sound even though Cooper grew bigger than her as the years went by. Cooper was kinda like Elf from the movie. He had a real innocence about him, seeing the world as a beautiful, magical place full of sunshine, sugar drops and lollipops. He always wanted to explore and had a natural love of the outside. He especially loved the yard at “Grandma’s” house, which was big and full of places to explore. Cooper loved sitting in grass in the summer sun, he also loved the fall leaves. He’d sit right in the middle of a pile if you let him. Cooper was the epitome of “man’s best friend”. Like a Normal Rockwell painting, Cooper would lay on his comfy outdoor mat, at “Dad” feet and would fall asleep to the sounds of birds, chipmunks and squirrels. Cooper also loved walks. He would spin in crazy circles with excitement whenever you picked up his leash. If he wanted to go on a walk and we were moving too slow, Cooper had no problem, jumping on your lap and staring you in the eyeballs to send the message, “Hey, let’s go…we might be missing fun outside!” Cooper had the most beautiful, expressive eyes and face and if you wanted to remember what was beautiful and kind in the world, you’d only need to look at Cooper. If Lola was the fun-loving spirit of our little family, Cooper was the heart. Both he & Lola became ill within months of each other. Cooper was diagnosed with cancer in May, but his treatments were so successful that we were blessed to have several extra months with him and he was in great shape for a 14 yr old pug for most of this time. When Lola passed in summer, Cooper received that much more extra love, having lost his big sister. Cooper was brave and strong as his own health issues mounted these past few weeks. His love of the outside and going on walks never waned, he was slower but he always wanted to go until he couldn’t. While our hearts are very heavy and we so miss our sweet, sweet boy, we know that his big sister Lola was waiting for Cooper and we love that they are back together again, two peas in a pod running, playing and enjoying all the incredible beauty of doggie heaven.
Font Resize
Contrast
Accessibility by WAH
Call Us Text Us